GTD Journey: There and Back Again with Nirvana

Yes, I have a confession to make: I went back to Nirvana. Again. After spending time customizing MS To Do, being excited about colorful emojis, backgrounds and all sorts of integrations with Outlook… I went back to the good old Nirvana.

I probably said it before, but Nirvana is still the best GTD implementation for me. It's simple and elegant. I like it because it allows me to have neatly well organized GTD lists. It is the only app that gives me a clear and straightforward view of all my commitments. And you might wonder why is that important?

Well, I worry a lot about things. My mind is constantly thinking, re-thinking and planning. One of the things that attracted me to GTD was the idea of “unloading” my thoughts, stepping back and making sense of them. But all those unloaded things need to be processed, and for my mind to be at ease, they need to be in an organized trusted place. So, Nirvana is the best digital tool to take care of all that stuff.

Maybe it’s because Nirvana has a more fixed structure, things are either in:

And that’s it. My brain enjoys having these well-defined buckets. And also because Nirvana allows a bird’s eye view of everything, distributed in all those buckets, or views filtered by Personal or Work areas because of the global filters. I have better control of projects states, so if a project becomes inactive, it’s easy to drag and drop it to the “Later” or “Someday” folder and all its next actions will be inactivated as well. No need to go back to the contexts list and move inactivated actions individually (something I would have to go through in MS To Do).

I liked my setup on MS To Do. I think it might work for a lot of people. But there were some details that bothered me:

I feel comfortable now with my decision. I was triggered to experiment MS To Do because of a change in my work (which recently shifted everything to Microsoft). So I used MS To Do for about a month and realized it was not exactly all that I expected. I still think it’s a great app.

And that’s okay. I know I will change my system based on my experience level, current needs, and changes in the available tools. And Nirvana still works for me, so I’ll stick with it a little bit more!

GTD Journey: Moving from Nirvana to Microsoft To Do

After several false starts the company I work for is finally migrating to Microsoft 🥳. No more sync issues between Google Calendar and Outlook for me (yay!).

I remember taking a quick look at Microsoft To Do last year and liked its simplicity, but because I only had one account I thought it was cumbersome to deal with personal and work stuff all together in one app. One of the reasons I liked Nirvana was the global area filter, so I could switch from personal to work mode, and keep a minimal number of context tags that were shared between personal/work .

Now I have 2 Microsoft accounts so things can be organized separatedly. I can switch from one to the other using the Microsoft To Do desktop app, both on my personal and work computers. I also have 2 mobile phones, one linked to my personal account and the other linked to my work account.

The 2 setups are similar, I’ll get into more detail about my personal one. 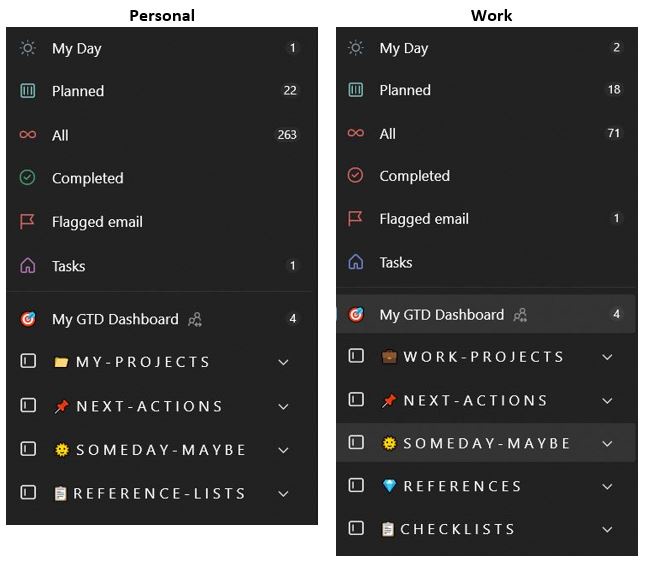 I started using Standard Notes by the end of 2020. I loved the simplicity, the privacy focus, and the syncing between devices. I subscribed to the 5-year extended plan at a discounted price then.

I had thousands of notes in Evernote that were accumulated during 7+ years of use. When I realized that all that information was trapped in one proprietary application, I asked myself: “What if I wanted to move these notes around?”. Also, Evernote got increasingly slower and bulkier. After learning about Markdown and Standard Notes, I exported all my notes from Evernote to the markdown format.

Starting over (almost) from scratch

So I had all my notes backed up in markdown, now what?

I didn’t actually re-imported all of them to Standard Notes. I archived my old notes because I noticed that most of those notes were assorted clippings from the internet. I realized I was a hoarder of information created by other people.

So I started over, copying only a dozen notes that had information I wanted to continue having access to.

As of today, this is how I’m organizing my notes:

(Note: I use nested tags, a feature only available on paid plans in Standard Notes)

I'm moving all my notes out of Evernote. And I have a notebook there with all my e-books notes and highlights for the past 7+ years. A total of 276 notes. One note per book.

I've always used this free service my.clippings.io to export my Kindle highlights to Evernote. It also exports to .txt, .pdf and .doc. But, the only way to have separate files (one note per book) is when I use the Evernote option.

My issue here is: how can I convert all these Evernote notes to markdown??😕

GTD Journey: Is my System too complicated?

I have never asked that question before. But suddenly I felt like I was overwhelmed and that I was spending too much time and energy to manage my lists. So this year I decided to sit down and write a description of my GTD system to understand what was going on.

The inspiration came from a post from Cal Newport in which he describes his “Rooted Productivity“ document. For him, it's a one page document that he keeps in a plastic sleeve on his desk. The idea is to have a “root commitment” that includes all your productivity habits.

GTD is based on 5 steps, which are:

Based on Cal Newport's idea, I came up with a description of my system based on the following questions: