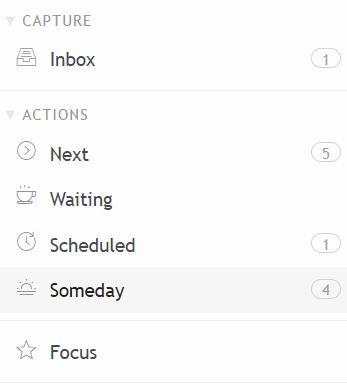 So after using Nirvana HQ in a minimal style I understood once more what GTD is all about. I had one of those Ah-Ha! moments just looking at Nirvana's left menu. This menu is basically:

And that's GTD in a nutshell. Inbox collects any incoming information, Next is whatever needs to be done as soon as possible, Waiting are for things we are waiting for, Scheduled are things incubated that we will take a look in future date and Someday is for everything not current or not active in our defined time frame.

That's the basics for GTD and on top of that we can create more granular lists with contexts, like: @home, @work, @errands, @calls, etc.

I discovered I don't need too many contexts (@home, @work, @errands, @calls is all I need) and that a simple Next Actions list differentiating between Personal and Work areas of focus are enough for me.

I've decided to (ironically) go back to using Evernote and Todoist.

I've been an Evernote member since July 31st, 2010! That's a lot of time! And when I decided this year to move to Onenote I exported the most important notes but basically left everything else in Evernote. I told myself I would reorganize, review and gradually move everything to Onenote (which never happened, all the old notes are still there).

The only reason I moved to Onenote was that at my new workplace I couldn't install Evernote for desktop and Evernote's web version was horrible. Now, a year later, Evernote Web has become quite similar to the desktop experience and I discovered last month that I could (finally) install Evernote on my work desktop. I don't know what happened, but I got to the Windows Store and I could install and launch Evernote without any trouble.

So... I'm moving back to Evernote and Todoist!

I think I've been a Todoist user since 2016. It has been evolving since I saw it the first time and I was surprised to find out now that it only got better during all this time. It's sleek, simple and works well on all platforms. I did move my tasks from Nirvana to Todoist quite quickly because it provides a frictionless way of adding anything to its Inbox.

And this the list setup I'm now using on Todoist: 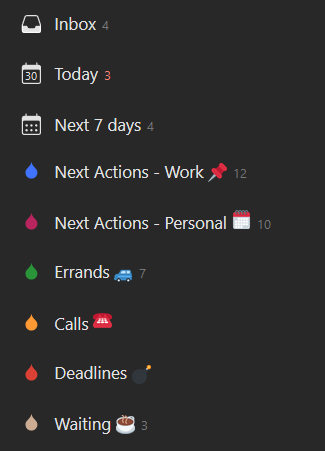 What about Nirvana HQ? (which is still awesome!)

So why I left Nirvana HQ?

I still think some Calendar reminders, specially for milestones, are useful to my workflow. The secret to not be overwhelmed using GTD is not going crazy scheduling all the tasks we see and adding them to a Calendar or adding dates in to-do list app. That will make the system extremely cluttered and you'll discover that you underestimated the amount of tasks you accomplish in a single day. We are not good at estimating how much time a task will take.

So Nirvana HQ made me understand this. Made me believe I don't need to add a date to everything. If you've ever used Todoist or any other To-Do list app you know they are basically built on dates. They encourage you to put a date on every single task.

So Nirvana HQ is great if you just want neatly well organized GTD lists. But if you're like me who likes to have an integrated system with options to go to the Calendar, set reminders, link projects to notes... well, then Nirvana HQ might be a little bit disappointing. Also, I need this whole system to work in sync on at least 2 computers and my phone.

It's all about being comfortable with the tools

Going back and forth using all these tools made me understand a little bit more about myself. It's a process and whatever organization system is being used, some trial and error will always happen.

Some people will live happily without any need to organize ideas and actions in a board or to-do list. I'm not one of them. Lists and writing down ideas is essential to my well being.

One of the positive aspects of GTD is that it can be applied in any tool, it can be paper based and it can be as simple or as complex as you want it to be. You just have to understand the principles.