GTD Journey: On (not) linking next actions to projects

So I use the GTD (Getting Things Done) method to organize my brain. It has allowed me to manage anxiety and stress over the years. From time to time I look at my system and reflect: is it getting messy? is it too complicated? is it really working for me now?

One of the things I’ve always thought was fundamental to me was having a system in which Projects and Next Actions are explicitly and solidly linked. I tend to spend more time organizing rather than executing projects. The truth is that we don’t execute projects, we execute actions that will eventually attain the project goal. And that idea is the basis of why GTD recommends having the next actions sorted by Contexts.

A context can be a place, a tool, a mindset, or the people required to complete a given task. If I want to make a phone call, I need my phone (@calls). If I want to pick up something at the grocery store, I need to go there (@errands). So the idea is to assign contexts to next actions so that it’s easier to decide what I should be doing at any given time because I have a limiting factor (context). It’s about focusing on execution.

I don’t think I paid too much attention to contexts in my system, I was more worried about setting up projects right. Hence, my preference has always been to use Nirvana to manage my projects and actions. But I want to do an experiment: use a simpler tool in which contexts are more upfront, forcing me to work by contexts.

Experiment with Microsoft To Do

I chose the app MS To Do for my experiment. I’ve tested it before and I think it provides a clean and beautiful interface, syncs on all my devices, and provides an easy setup.

I’m using two different accounts: one for personal and one for work. The company I work for is switching everything from Google to Microsoft so I will take advantage of that. I already have an Office365 subscription for my personal file storage and calendar.

I followed the official GTD guide to set up my system. I have a “Projects” list with hashtags to identify them. So I still have some way to “link” projects to next actions, but I would say it’s a weak link. The hashtags are more like temporary keywords to remind me what that action is related to. I don’t have a proper “project folder” anymore, containing all actions related to a project and that’s a big mind shift for me. 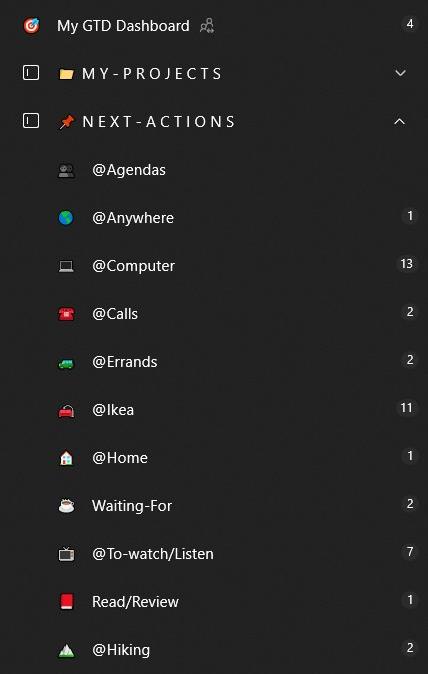 Right now I’m happy with my setup. I like the option to use emojis, it makes my lists more enjoyable. One of the few things I disliked about Nirvana was that it was visually uninteresting to me. I like some colors and visuals to attract my attention.

One thing I’m using consistently on MS To Do is the “My Day” feature. In the morning I open up the “My Day” tab and it really helps me plan my day. It’s a smart list that resets every night, so it forces me to think about what I want to accomplish every day and focus on them. In Nirvana I used to have the “Starred” items to focus but since this list didn’t reset, I used to have stale items in there and I constantly skipped the daily planning.

So I’ll see how this experiment goes. I’m already seeing benefits in having a quicker way to process my next actions: I just move or drag/drop the item to its context. Done. No filters, no clicking and choosing through various drop-down menus. Also, personal and work are 2 separate accounts, but on the desktop app I can easily move between the two. So it creates a nice work-personal boundary in my brain and still allows for some integration. Let’s say I remember something about work that is bothering me: I can easily capture that capture in my work inbox if I’m on my personal computer. Same thing if I’m on my work computer and want to see my personal lists.