The one thing that made me fall in love with Nirvana at first sight was the global filter. It is brilliant and I had never seen it working so seamlessly in other apps.

I can setup different Areas of Focus, like “Personal”, “Work” and “Blog”. The global filter works across the whole system, so I can focus on my Work related Actions and Projects being sure that nothing from the other area is showing as well. I can also see the whole picture grouping all my areas together.

The second thing was the implementation itself: it is based on GTD. After I saw Nirvana I wanted to have the same experience while using Todoist, for example. I tried to mimic Nirvana's setup on Todoist but it was not the same: trying to find the right combination of filters/tags/projects levels was not giving me the results I wanted (not to mention the time spent trying to get it right).

In Nirvana all Actions can be categorized into “GTD-style” buckets right there, “out of the box”: 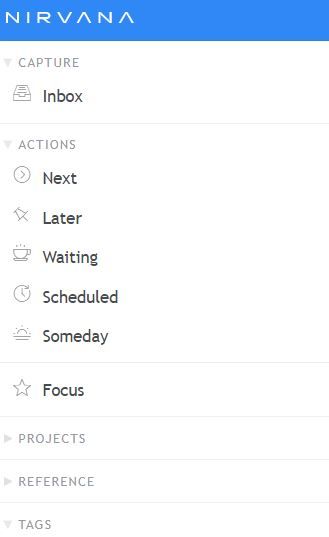 It offers a way to easily send emails into the app so that it goes directly to the Inbox.

The projects can be set up as “Parallel” or “Sequential“:

All items (even projects!) can be assigned to totally customizable labels (as GTD contexts like: @home, @calls, @errands, etc.) 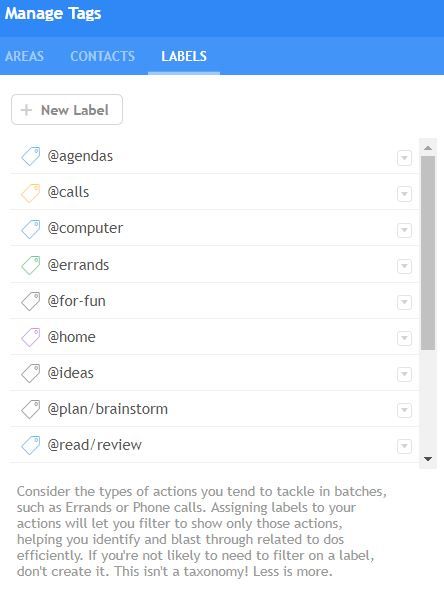 There is even the option to assign levels of energy and time to each action so that we can filter using these parameters.

This Quick Guide shows all the main features of the app.

So right before moving to Nirvana I was using Todoist.

To be honest I enjoyed adding emojis to my projects and tags, getting a little elephant icon whenever I linked a note from Evernote, changing projects colors, the seamless Google Calendar integration, etc. And I knew that was only possible if I used Todoist (or some other similar app). But, during my quest to try to make Todoist behave like Nirvana, I just got frustrated. I tried hard! But it never ended up as simple and elegant as Nirvana.

So after I realized I was spending too much time tinkering with an app trying to make it become something else, I looked back at Nirvana and listed all the things I would miss if I did the switch.

These were the features I used in Todoist that I thought I would miss:

I understood that all those bells and whistles were not an essential part of my GTD system. So I went back to Nirvana and moved everything I had in Todoist to it. This is a screenshot that shows the same projects on both apps after I did the move: 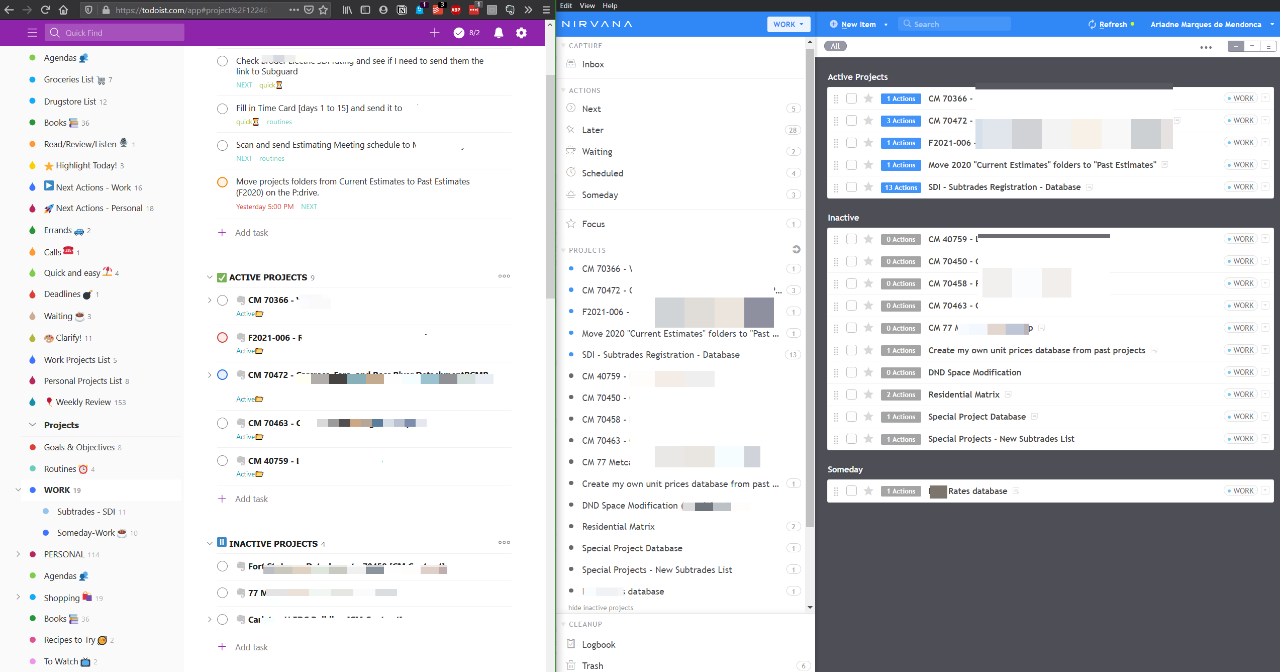 This image compares the Projects view (Work Area of Focus). You can see that my Todoist was all colorful and beautiful, but I had a lot of different filters to try to emulate Nirvana's global filter, and I got maybe too excited about creating contexts and putting them all in my favorites list on Todoist.

What I like about Nirvana is that I can see at a glance the full picture: my active projects, what is inactive, what is in “someday/maybe”, what is incubated (I use the “Later” option in Nirvana to park incubated projects). And it's super easy so go through the Next, Later and Waiting lists for each of my Areas of Focus or for all of them at once! In every view there is the option to filter by the labels (contexts) as well.

Seriously, simply classifying my projects between “Active” and “Inactive” has been a power struggle for me for years! I could never get it right! I realized I needed it to be clear and in front of me: the way Nirvana does.

Nirvana organizes the information better and that works pretty well with my agitated brain. Everything is listed in such an orderly manner: Inbox, Next, Later, Waiting, Scheduled, Someday, Projects, Reference. Projects in blue are active, Inactive projects are grey! Awesome for weekly reviews!

Also, I have a clear understanding now of the hard edges between my Calendar and my to-do list. I confess that with Todoist, given the focus it has on dates, I was “blurring” my calendar with my next actions and it was getting rather messy!

The “Focus” feature is another reason I love Nirvana! Focusing items gives them a star ⭐ and makes them appear in the Focus list. I tried to do that with my “Highlight Today” filter in Todoist, but it was too manual (I was using the priority flags to filter them... it was not as easy and clean as Nirvana). Also in Nirvana items will show up automatically in the focus list if it's been scheduled or assigned a start date or due date. When the date arrives, the item appears in my Focus list.

It's true Nirvana lacks some hot exciting features (like Calendar integration or attachments), but it's all about having the essentials and getting rid of the superfluous.

After using Todoist for a while I missed something simpler with no distractions. Todoist is a good app...but...too many personalization options were making me spend too much time “tinkering” with the system instead of actually executing my next actions.

So I've finally settled with the trio:

Nirvana is powerful and simple. Without a doubt an excellent implementation of the GTD framework!

(**) As a side note, although I have a personal Microsoft account my work is all about Google and it was easier to centralize both my Personal and Work Calendar in Google Calendar due to synchronization issues between Outlook and Google.