My thoughts about “Dragonfly in Amber” (Outlander #2) 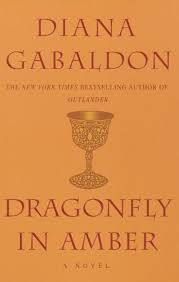 I read the first book of this series (Outlander) in 2013 and I remember that at the time I have enjoyed many aspects of the story but I’ve thought that the book was longer than it needed to be. I had the intention to continue on reading the series but I eventually forgot about it. And maybe knowing that it was a long series (today there are 7 books published!) made me postpone reading it until I had more time.

This year I was leisurely browsing Netflix and I saw the Outlander TV show available! Well, I decided to watch it! At the same time, I started reading the second book because watching the series Season One made me want to go back to that world. And that made be dive into this epic story story once more! Each book is like a chapter in the larger story, so it’s the kind of series you have to read the books in the order they were published.

Overall of the book series

Before I talk about the second book, I will say that Diana Gabaldon is a superb writer. The books are well-written with generally well-researched historical background.

She has a way of telling a story in the most compelling of ways with complex characters and solid world building.

The Outlander series is a mix of time-travel/historic romance and it starts with the story of Claire Randall, a former combat nurse that lives in 1945 and was transported back in time to Scotland in 1743, in the middle of clan wars and borders conflict between scots and englishmen. Claire encounters a young Scots warrior named James Fraser and they experience an epic romance story together.

The second book : “Dragonfly in Amber”

It is a follow-up of the first book, but it starts with Claire Randall in the “present” going back to Scotland and starting a research about the Battle of Culloden and aftermath of the war. From the first book we have an idea that the main characters were somehow involved with the historic battle of Culloden that took place in 1746. This battle marks the final confrontation of the Jacobite rising of 1745, in which the Jacobites, with the support of France, fought to reestablish Charles Edward Stuart, known as “Bonnie Prince Charlie” in the throne of Scotland. We all know from historical facts that the battle of Culloden ends the rebellious rising and the clan system in the Highlands of Scotland.

So, in this book, we are transported back to 1745, with Claire and Jamie fleeing from Scotland to find refuge in France. Meanwhile, the story brings us flashes of the present, with Claire telling her adventures to her daughter for the first and revealing her secrets.

I was amazed by the quality of the storytelling because of its freshness and pace. I love the writing style of Diana Gabaldon: she can be “flourishy” without being boring. The reading flows effortlessly.

The time travel aspect of this series can at first seems too absurd and I was worried that it could spoil the story. You know, it is complicated to avoid time travel paradoxes. And sometimes when you explain it too much, the story can loose its power. So far in this series I have not seen it being spoiled. I think the author did a good job of playing with historical facts and avoiding paradoxes. So far, so good!

The book is quite a ride, with politics, war, romance, personal struggle and historic facts being beautifully intertwined with fictional characters. I am totally hooked to the series now, and I have already started reading Book 3 “Voyager” (and enjoying it so far!).

I highly recommend the series for historical romance lovers who fancy a bit of time travel vibes!