I have always loved stories about robots, AI's, bots or any sentient like machine. This book reminded me again why I love these stories. It is excellent! 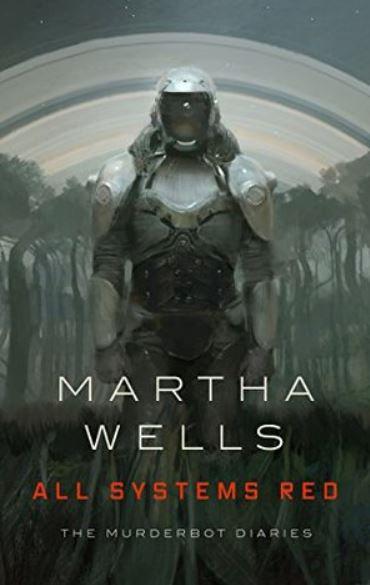 One thing that happened to me while reading the first chapters is that I automatically assigned a female gender to Murderbot. I don't why I did it, but Murderbot was so relatable to me, I created empathy for all its fears, anxiety and social awkwardness. But then it is clear that Murderbot doesn't have a gender, because it is a security bot, not a sexbot. I wonder if the book cover led me to think that. Although I showed it to my husband and he told it was a totally gender neutral bot in that cover.

Maybe that is proof of how engaging and well written the character is. It's all about what it means to be alive, what it means to exist and think, no matter what or who you are. It was so interesting to be inside this bot's head and find out that it doesn't know what it wants, kinda like a human mind, all confused and asking why the universe existed:

It’s wrong to think of a construct as half bot, half human. It makes it sound like the halves are discrete, like the bot half should want to obey orders and do its job and the human half should want to protect itself and get the hell out of here. As opposed to the reality, which was that I was one whole confused entity, with no idea what I wanted to do. What I should do. What I needed to do.

And in their corner all they had was Murderbot, who just wanted everyone to shut up and leave it alone so it could watch the entertainment feed all day.

And I already started reading the sequel, because this is one of those “Hell, yeah” kind of stories.